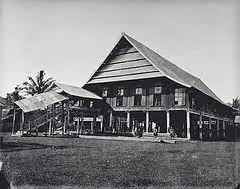 BRIEF HISTORY
The state of Gowa was in existence before 1300 and was said to have been founded by four princes namely, Batara Guru, Ratu Sapu Marantaia, Karaeng Katanka, and a fourth whose name has escaped history. In time, the original four states grew into a confederation of nine: Tombolo, Lakiung, Parang-parang, Data, Agagjene, Saumata, Bissei, Sero and Kalli. The hereditary rulers of these nine states elected a leader, known as the Paccalla, to regulate affairs between them. Later still, during a time of chaos and warfare, To' Manurunga, a woman of celestial origin descended to earth and established her rule over the whole the entire kingdom.

The original concept of confederation extended to include a powerful alliance with the neigbouring kingdom of Tallo. Generations of intermarriage between the two Royal families resulted in a dual kingdom that dominated the Makassarese world. Although the kingdom of Gowa was the senior of the two, the ruler of Tallo also served as Viceroy, or Deputy Ruler, of Gowa.The heyday of this dual kingdom lasted from 1590 until the Dutch conquest in 1669. The dual kingdom converted to Islam 1605, "inviting" the other principalities and kingdoms in the vicinity to do the same. On their failure to do so, the Makassarese launched a jihad to convert them by force. Boni, Bima, Sumbawa and a number of smaller states fell to stronger arms, or peacefully submitted to Islam, during a series of expeditions between 1611 and 1620. The sultanate accepted the protection of the VOC in 1669.

Gowa remained relatively peaceful until 1777, when a pretender emerged claiming to be the exiled Sultan Usman Fakhr ud-din. Known as Sankilang, he managed to convince several members of the Royal family, including the former Sultan's mother. He gained a large following and quickly conquered Gowa and Tallo. He deposed and expelled Sultan Zain ud-din and caused the abdication of the Sultana of Tallo. It took the Dutch four years to dislodge him, but he managed to escape into the jungles and hold out for a further three years.

Increasing encroachments by the colonial power, sapped away at the power and prestige of the Sultan. Faced with a stifly worded ultimatum in 1905, Sultan Husain escaped into the interior and began a guerilla resistence to the Dutch. After a brief war, the Dutch defeated the Gowan forces. The sultan having died in the jungles, they abolshed the sultanate and placed Gowa under direct rule.

In line with a new policy of "self-rule", the Gowan sultanate was restored, along with a number of other states, in 1936. His son and successor, Sultan Muhammad 'Abdu'l Kadir Aid ud-din, sided with the new Indonesian Republic during their struggle with the Dutch. Perhaps for this reason, the sultanate survived longer than many other princely states. However, this status was eventually terminated on1st July 1960. Nevertherless, the sultan continued to enjoy an honoured place in society, together with his styles and titles, for the rest of his life. His second son, Andi Kumala, succeeded to the styles and titles, and to the nominal sultanate in 1978.

GLOSSARY:
Adat: traditional custom, status.
Annak-karaeng: princes.
Batakang: spear.
Bate Salapang: the supreme advisory council of nobles.
Bate-bate: prince of a small state.
Bicara: process of law.
Dewata: God.
Gallarang: head of a village or region.
Gaukang: sacred object.
Jennang: regent.
Kali: the chief Islamic official in the kingdom.
Kafir: unbeliever.
Karaeng: prince, ruler.
Karaeng: the title borne by the ruler of Gowa before Islamisation.
Musu'asellennge: a term applied to the Islamisation wars of the early seventeenth century
Pacce: "pain", i.e. empathy with one's fellow man. A term applied to the spiritual unity of the people.
Paccalla: the elected ruler of the original federation of nine states.
Pati-Matarang: Heir Apparent of Gowa.
Rapang: a "Mirror of Kings" chronicling the wisdom of the ages and a guide for good government.
Salapang: "the nine banners". A term applied to the core of nine states forming the original union of the Goa kingdom.
Salokoa: crown.
Sambangang pulawang: gold chains with pendant medals forming part of the regalia, but originally bestowed by European powers on earlier rulers. The reigning Sultan had six, when the Republic was established.
Siri: face, as in self-respect or worth.
Sarat: Islamic religious council.
Shahbandar: minister for external trade, and chief collector of revenue and customs.
Siri: face, as in self-respect or worth.
Sudang: the state sword used in the installation ceremony for a new ruler.
Sultan: prince, ruler. A title borne by the ruler of Gowa after Islamisation.
Syurga: Heaven.
Tautongang: gentry, lower nobility.
Tuma'bicara-butta: "spokesman of the land", the most senior office in the land after the ruler. A title often equated with Prime Minister.
Tuma'ilalang: Minister fore Home Affairs.
Tuma'ilalang Lolo: 'the younger Tuma'ilalang', a high official who serves as the intermediary between the Tuma'bicara-butta and the Bate Salapang.
Tuma'ilalang Toa: 'the older Tuma'ilalang', the title of the presdt. of the Bate Salapang.
Tuma'kkajananngang Ana'bura: Minister in charge of Public Works, Crafts, Local Industry, etc.
Tuma'nurung: "he/she who descended", a term applied to the legendary rulers of the state and their descendants.
Tunisombaya: 'he who is given obeisance', a term of address applied to the ruler.

GENEALOGY
The First (or Celestial) Dynasty
Batara Guru I